Security operatives have apprehended a robber alongside his accomplice after charm prepared by herbalist failed to work. 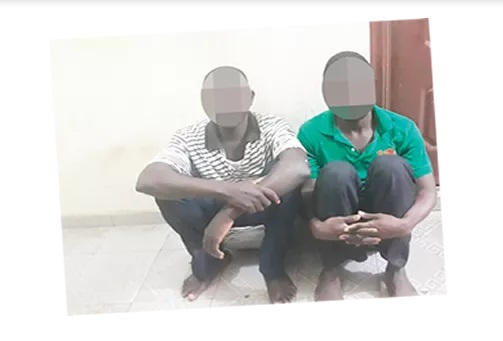 The suspects confessed to the crime.
A herbalist, Abudulahi Mudi, 25, has revealed how he abandoned his practice of treating sick and diseased people with herbs and incantations, to embrace armed robbery, NewTelegraph has reported.
This was even as he confessed that he had earlier been remanded in prison for similar crime of stealing cars. Before the arrest that saw him remanded in prison, he and his gang had already stolen 16 cars.
The gang had been having a ball, running around towns snatching cars, knowing quite well they couldn’t be caught. They couldn’t be caught because Mudi prepared a charm, which made it almost impossible for police to stop the gang. Everything appeared to be working out well with the charm and his life of crime, until something went wrong. Mudi was arrested and remanded in prison, while his partner in crime escaped.
He was still in prison when he heard that his partner had been killed while attempting to steal a car. After his release from prison, he went back to his herbalist work. But again, the devil came knocking and Mudi with great alacrity opened his door. He went back to his old ways of car snatching. This time around, he said that he prepared a more portent charm to evade arrest. But again, something went wrong, leading to his present arrest.
He is right now a guest in the custody of the operatives of the Inspector-General of Police Special Intelligence Response Team (IRT). According to the police,
Mudi specialised in snatching cars at the Federal Capital Territory, FCT, Abuja, using toy guns. Mudi, a native of Dekina Local Government Area of Kogi State, was arrested alongside with Christopher Ilia, at different locations in Abuja. They were both grabbed after snatching three vehicles from the owners, which they sold at giveaway prices to already waiting buyers at Kogi State. Mudi and Ilia ran into trouble after Ilia, a former security guard, working with one of the federal ministries secretariats in Abuja, accosted a man driving a Toyota Highlander Jeep at Garki and dispossessed him of the sum of N450, 000, car key, documents and mobile phones.
A police source revealed: “The victim reported the robbery to the nearest police station and investigation commenced. When the policemen couldn’t find Ilia, the IGP, Ibrahim Idris, asked IRT to take over the operation. After the robbery operation, Ilia sold one of the victim’s phones.
The IRT men tracked and arrested the buyer. He was used as a bait to catch Ilia and later Mudi. Ilia told IRT that Mudi, a native doctor, was the leader of the gang. After Mudi was arrested, his house was searched and the victim’s car key was found in his shrine. Mudi also confessed that he had been into crime for a long time. He said that he specialised in car snatching.
He was also arrested in 2010 over the same crime of car snatching and remanded in prison.” Speaking after his arrest, Mudi said: “I’m a native doctor. I treat people suffering from stroke, broken bones and other illnesses. My late father taught me about herbs. I have been doing it for a long time in Lokoja, Kogi State.
In 2012, one of my friends, based in Lagos State invited me over and introduced me to car snatching. My friend said that the business fetches quick money than administering herb on sick people. “I accepted then because I was a native doctor and I knew I could prepare charms that would prevent us from being arrested. My friend taught me how to drive, and we started removing people’s cars from parks. My friend had a masters’ key, which we used at night to remove cars from where they are parked.”
Revealing their modus operandi, Mudi said that he and his partner would walk into a night club, pretending to have gone there to relax like other patrons. Later, they would walk out to the parking lot, using the masters’ key, steal cars. Mudi recalled: “My friend would open two cars of his choice; we would drive both away. We take the cars to our buyers, who are based in Lokoja.

We steal cars mainly around Surelere and Ikeja areas because traffic at those places are not too bad. We have stolen about 16 cars in Lagos before I was arrested. I was arrested after police trailed one of the receivers in Lokoja. The police used the receiver to trick and arrest me.
The receiver called and told me that he was in Lagos. I rushed to meet him and was arrested. The police asked me to call my friend and when I did, he sensed danger and escaped.” Mudi was charged to court and remanded in prison. While he was in prison, he heard that his friend had been killed.
“I got news that my friend was killed while attempting to steal someone’s car in Lagos,” said Mudi. He continued: “I spent four years in prison because I couldn’t fulfill my bail conditions. When I got out in 2016, I relocated to Abuja and I started treating people again. Early this year, Ilia came to me for treatment. He had gonorrhea. We became friends and he told me that he lost his job as a security guard, and wanted me to help him. “At that time, a guy, who used to buy stolen cars was frequently calling me, asking for cheap cars. I told Ilia that we could make good money if we could get such cars for the caller. Illa then suggested that we should get military uniforms.
We got the uniforms and started going out to bus stops to hang around. We would flag down a clean looking taxi and once we entered, we would bring out our toy guns. We would force the driver to halt and take his money and car. We would then call the receiver residing at Ejule community in Ofa Local Government of Kogi State. We collect between N120, 000 and N150, 000 on each car.
“The charm I prepared for protection was highly effective and it prevented the police from arresting us. But Ilia was the person that got me into trouble. He went somewhere and robbed a guy. He didn’t disclose the amount of money he took from the man. He, however, brought the man’s car to me and asked me to prepare a charm, which would prevent the man from looking for him. “He didn’t even give me proper details about the operation.
I accepted and kept the keys in my shrine and before I knew what was happening, he had brought police to my house to arrest me.” Ilia, 30, a native of Lokoja, claimed that his inability to secure a job after he was fired as a security guard, led him into crime. His words: “I became so desperate after I lost my job, that I started robbing people of their phones. I used to go out in the mornings, and whenever I see motorists with broken down vehicles, I rob them with my gun. I can’t remember the numbers of phones I had stolen from people before I met Mudi. It was Mudi that introduced me to car snatching. We have robbed three cars together and Mudi is the person that knows the buyer.
I have never been arrested before because Mudi, who is a native doctor, said that he had prepared a charm, which prevented police from arresting us. We have been successful so far, but I don’t know what happened in the case of the man that I robbed at Garki. “I sighted the man urinating; it was about 5: a: m. I approached and pointed my toy gun at him. I asked him for his money. The man panicked and told me that the money was inside the car.
I asked him to bring it out. He gave me and then I took his phones and car key. I took his car key because I didn’t want him to chase me. I didn’t take the car because I don’t know how to drive. I sold the phones for N10, 000 each. I later found N450, 000 and some cheqeu booklets inside the man’s bag. I took the man’s car key and N5000 to Mudi.
I told him to prepare a charm, so that the owner of the car key wouldn’t look for me. Mudi assured me that he would. I didn’t tell him how I robbed the man or the amount I took from the man. I went on a spending spree. I bought clothes for my girlfriend and furnished my house with part of the money. After I was arrested, I led police to arrest Mudi because his charm didn’t work.”